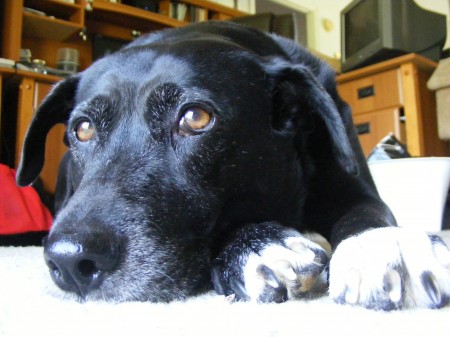 Sadie is the first dog Trav and I have had together. This beat up black lab mutt wandered into our yard in January 2002, with scratches about her body and a big gaping chest wound. Our first thought was to call animal control to get the poor animal some help. After all, we really did not want a dog. So we called them, and they said they would come get her. Figuring the animal would be picked up soon, we decided she should not have to be to uncomfortable while she waited for her ride. So Trav put out a big bowl of water for her, and ran to the store and bought a small bag of dog food, figuring while he was at the store, there was always the chance she could be picked up by animal control while he was gone. When he got back, she was laying where he had left her, only Emmy had given her an old packing blanket to lay on, and a little bit of ham to tide her over. We put out food and left her for the night, looking out now and then to see if she was still around. She stayed all night, and animal control had not shown. The next day we went across the street and asked the neighbor if she had seen the dog before, since the neighbor has been here for 20 years and seems to know a lot of people in the neighborhood. She didn’t know… but she agreed with our worst fears that the dog would probably just be put to sleep by animal control. At that point, Trav crumbled, and gave Emmy his own doggy eyes which of course caused Emmy to crumble! We took her to the vet, as yet unnamed due to not wanting to get too attached until we knew if she would survive. After the vet checked her out, he told Trav they would have to keep her for the night, and perform surgery, but she would survive, so start thinking of a name. Everybody at the vet’s told us what a sweet dog she is, and they were right! We named her after Sadie Hawkins, because she chose us.

She’s a wonderful dog, and here are some of the things we love about her, in no particular order: