We traveled down to Lake Wales (a two hour drive) to participate in a 5k mud/obstacle run. It was a lot of fun! 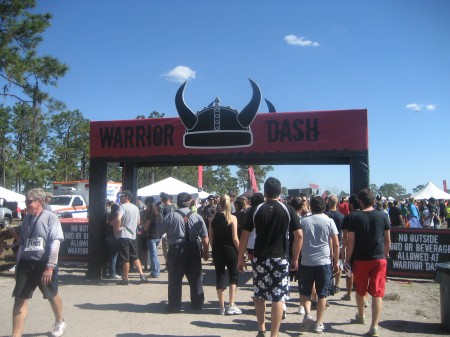 The obstacles were good and the camaraderie was awesome. We waited at the start line for nearly 30 minutes so we could be in front, and on one of the obstacles we had to wait almost half an hour to go on it, so we talked to quite a few people and watched everyone go over the obstacle in front of us. Some of the people were quite amusing. They encourage crazy costumes at Warrior Dash; we found Nemo and Waldo, too! We also saw men in suits, Hulk Hogan, Randy Savage, men dressed as fairies, beauty queens, and princesses, and all sorts of people in tutus.

While waiting, we talked to one guy in a kilt… I was wondering if he followed the tradition of men in kilts being bare under there but he said he kept it family friendly. This same guy had already run a 5k earlier in the day and had a soccer game to coach in the evening. Whew! The lady behind us was 55 and we were quite impressed with her physical abilities.

Here we are, nice an clean before the race: 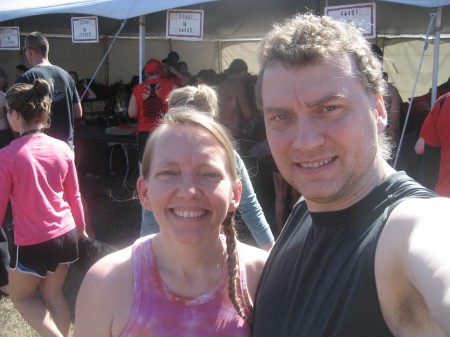 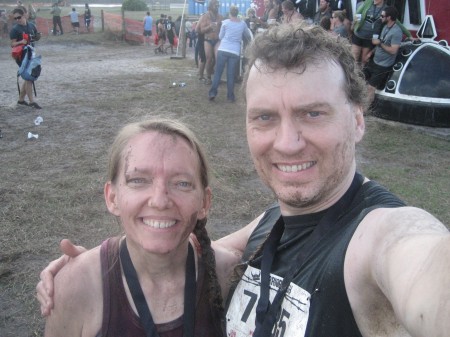 They took pictures at various points of the run so hopefully we can get some good ones and post them.

For obstacles, there were several mud pits and a couple of places to wade through knee deep water. After the first mud pit, my mud-caked shoes felt like bricks on my feet but I was able to stomp it off as we went. I was amazed at the number of shoes left laying around after each mud pit! People also seemed to shed clothes on a regular basis. Running through the deep sand was very difficult so we’re going to try and find places to train around here where we can run in loose sand.

My favorite obstacles were climbing ones. One was a big plywood A-frame with knotted ropes, up and over! The other one was near the end… 3 A-frames that started and ended by climbing a net, with rock climbing-type walls in the middle. My little legs had trouble on parts of that but Trav helped me! He’s a great teammate and partner. I want to challenge myself physically and get over the obstacles on my own, but his help is appreciated very much when I need it.

One of the other obstacles I enjoyed very much was an up and down balance beam where we were getting blasted with freezing cold water. So refreshing! And one was a little nerve-wracking because as we were going over one where you climbed over a frame using chains, there was a guy underneath with a nail gun, putting the obstacle back together!! Whoops.

We were pretty dirty at the end. 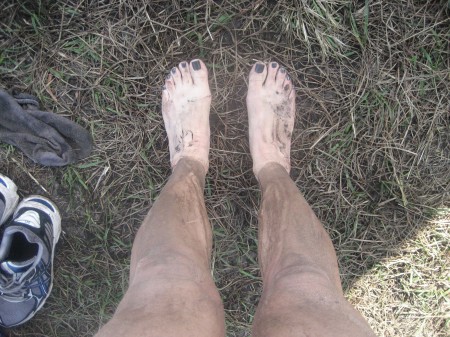 Sticky, sticky mud! It just kept coming and coming when I tried to rinse off. On the way home, we went to dinner at Ruby Tuesday’s and I still had dirt on my ears, neck, and arms. Luckily, the rest was hidden by clothing.

Also at Ruby Tuesday’s we saw the people that were behind us in the obstacle line. They came over to thank Trav for being such a standup guy, because while were were in line, a kid cut in front of the ladies behind us. Trav noticed and told the kid that he was very rude for cutting in, and the kid just shrugged and continued to stand there!! Ugh. But the ladies were grateful he said something, and they did manage to get in front of him, but he still jostled and cut in front of people while actually ON the obstacle. It was nice that they came over afterwards to say thanks, for that, and for helping the 55 year old over the obstacle, too.

Oh, and the last obstacle was jumping over fire!! I’m hoping the pics for that came out good. Trav and I jumped over them hand-in-hand, and also crossed the finish line that way. Awesome!

Our next run is Mud Endeavor in Brooksville… can’t wait!