October 16, 2010 was the most perfect day of my life. We had a thrilling, exciting and life-affirming experience that day… skydiving!

We chose the Skydive Space Center because they offer the world’s highest tandem jump at 18,000 feet. For this type of skydiving, you’re strapped to the front of an experienced jumpmaster, and you get to freefall for 13,000 feet, which is a little over a minute – it doesn’t last long when you’re going 120 mph! Then after the parachute opens, it takes about 5-6 minutes to cover the last 5,000 feet to the ground. We also got the Ultimate video package to go with it, which means you have a videographer to film your freefall, and your jumpmaster has a camera on his wrist, so the entire jump is filmed.

We arrived at the center around 10am, and the first order of business was to get weighed (there’s a 220 pound weight limit), pay for the jumps, and  sign our lives away on 12 pages of paperwork. Yep, I get it… skydiving is dangerous. Yep, I get it… I could be hurt or killed. Yep, I got it the first 10 times you stated it in the paperwork!

With the papers all signed, initialed and filed, it was time to go out to the hangar to see about getting our gear and safety briefing.

When we went out, we each got to meet our jumpmaster and videographer. I was hoping for a cute jumpmaster and I was not disappointed! Cris gathered all of his people together and we got instructions on what to do and how the jump would go. Ki (my excellent videographer) did my pre-jump interview (which you’ll see below); Trav and Bleys also got their interviews, gear and briefings, and we were ready to go. 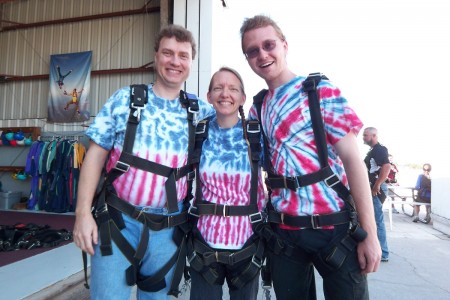 We were in the third group to go up, so as we waited, we watched the other groups leave and then land. The only thing I was little nervous about was the landing (if I break a leg, how can I go dancing?), but after watching the others come in, I didn’t worry any more. All of the landings were without incident – very smooth. Also while we were waiting, we met the pilot. When somebody commented on jumping out of a perfectly good airplane, he said, “Yeah… it’s not that good of a plane.” As long as it was good enough for the 15 minute ride up to 18,000 feet, that was good enough for me. :) We also had an impromptu dance practice on the foxtrot box step while we waited and Bleys’ videographer wanted to know if that was our last dance. I hoped not!

By the time we were ready to board the plane, my face was sore from smiling so much… I don’t think the grin left my face the whole time we were there. Little did I know what a massage my face was about to get! So, without further ado, here’s the video. Because it’s edited to include shots from two cameras, the freefall seems much longer than it really was. Down below are my comments about different parts of the video.

2:00 The center is in Titusville, near the Kennedy Space Center. Off in the distance, we could see the buildings and runways for the Space Center.

2:55 We exit the plane. What a rush as we tumble for the first few seconds. I forgot to arch my back and keep my head back… I’ll remember next time, Cris! If I do that, can we freefall on our backs for a few seconds? I think that would be neat.

3:45 You can see the airport near the middle of the screen. It looks so small from up there!

5:00 I wonder what all of the hand signals mean. Or are they making their bodies do certain things with gestures? Perhaps I’ll find out if I ever train for a job as a skydiving videographer.

5:43 Ahhh… sweet, sweet relief, from the wind in my face and my ears popping. 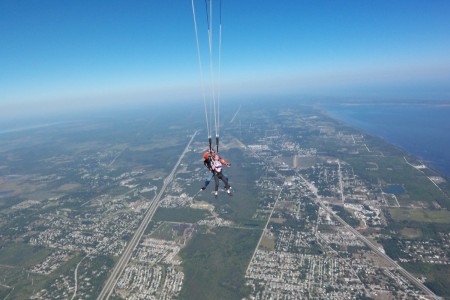 6:27 I should have looked in the thesaurus before we left, for synonyms to the word “awesome!”

6:50 Wheeeeeee! Pull down on one of the steering lines and you go sideways and do circles! That was a really fun part.

7:15 I’m a little disappointed in my answer to the question, “Will you do it again?” All I thought about at that moment was the money instead of the thrill. Later on, after I had time to process the whole thing, my answer changed to, “Yes, definitely! When can we go again?”

7:45 Perfect, soft landing. I had a little wardrobe malfunction on the way down… shortly before we landed, Cris loosened the harness and my bra came popping up over my boobs. Whoops!

After the jump was over, I felt spent, but in the best way possible. What an intense experience! The buzz from the jump lasted about three weeks… I felt so good! Ki said it was addicting, and I can see now how that can be. I watch my video every day and I can’t wait to go again.

I especially want to thank Cris & Ki for making a safe and fun experience I will always treasure.<3 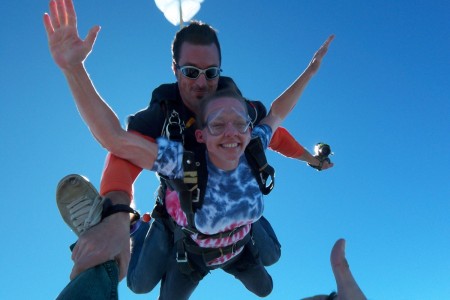