Today we went over to Orlando to see Bleys’ new place. “On the way”, we went to Cocoa Beach and spent several fun-filled hours body boarding. 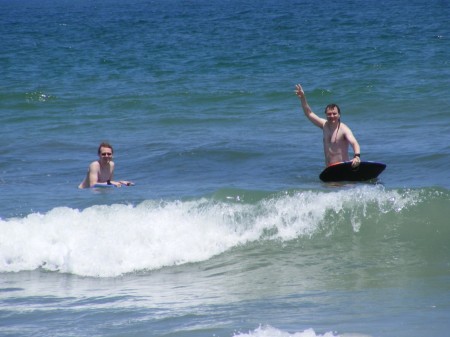 I was pretty excited because Cocoa Beach also happens to be where the Ron Jon Surf Shop is… a place I’ve wanted to go ever since we started seeing ads for it in Florida. It was really neat! Way overpriced, though. I don’t think I will EVER pay $72 for a pair of flip flops, even if they do say Ron Jon on them. Not everything was that terribly overpriced but we were a little shocked by that one. The store was huge, with two stories, and they had a lot of cool stuff there. Apparently it’s the largest surf shop in the world. Here’s a view of the outside, including one of the statues gracing the front yard of the store. 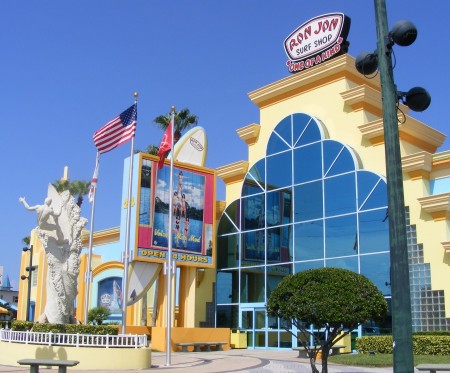 After the beach we went to see Bleys’ place. Of course, the minute we got there, it started raining cats and dogs, so we had to sit around in the lobby and eat Dum-Dums while we waited for the rain to let up. Then they took us to see the model apartment and it was quite nice. I never had such a nice place when I was going to college! He’ll be sharing his apartment with 3 other guys so that ought to be an interesting experience. Hopefully it all goes well.

So that was our exciting day. Next we’ll rest and treat our poor poor sunburned skin! And Trav burned the soles of his feet on the hot wood of the boardwalk, can you believe it! I never saw that happen to anybody before. We’ll probably go back next week, after we move Bleys into his new pad. Can’t get that close and not stop by the beach! :)