This is the story of the seventh day of our vacation to North Carolina. You can also read about the background and trip up, the first day, the second day, the third day, the fourth day, the fifth day, or the sixth day.

Gem mining!! For me, this was the highlight of the vacation. We went to Rose Creek Mine on Thursday and then I got to go again on Friday. Jen & Michelle stayed behind to tidy up the cabin (thanks, Jen & Michelle!!) and the guys dropped me off and went exploring for a while. Here I am at the entrance: 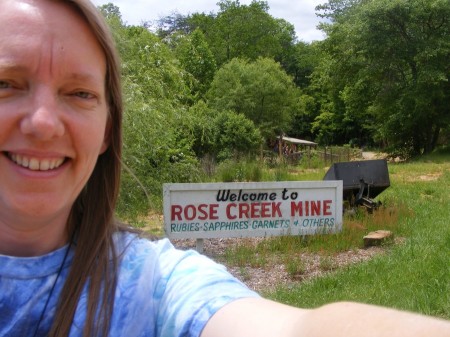 The way it works is you dig a bucket of dirt from the dirt shack and take it to the flume, where you use a screen to wash the dirt and clay away from the gems and rocks. You get to keep anything you find! Each bucket of dirt was $4, except the first one, which was free.

The dirt comes from somewhere nearby – this mine is not “enriched” with other stuff, unless you buy the prefilled buckets which are salted with some very pretty gems. Here’s the dirt shack:

Those buckets of dirt get pretty heavy after a while… the first day I did 5 buckets (Trav did 3 and Bleys did 1) and the second day I did 9. On the first day, Mike & Trav very kindly donated everything they found to my collection. Thanks, guys! Here’s the work area:

First you take some scoops of the dirt and throw it into the screen. Then put the screen in the sluice and let the water wash through it. To aid in the removal of the sticky, sticky clay, you can rub the dirt with the blue & yellow scrub brush. Put anything you find into the white container and at the end of the day, the fine folks there will sort, bag and label your treasure. 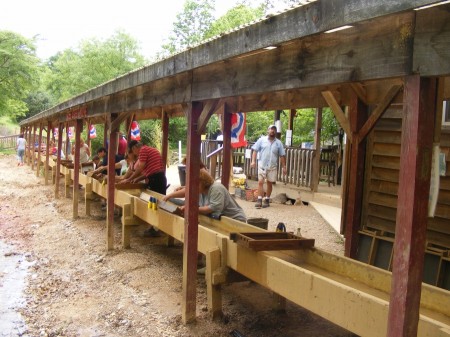 The ladies sitting next to me on the second day had been there all week. The warning on the mine’s pamphlet sure got it right… mining can be addictive! I also had a lot of fun watching them sort other people’s stuff. There are some very pretty gems to be had.

My next post will be all about the gems we found. Here’s one of my favorites – a beautiful topaz which sparkles with rainbows. The picture doesn’t do it justice but here it is anyway! 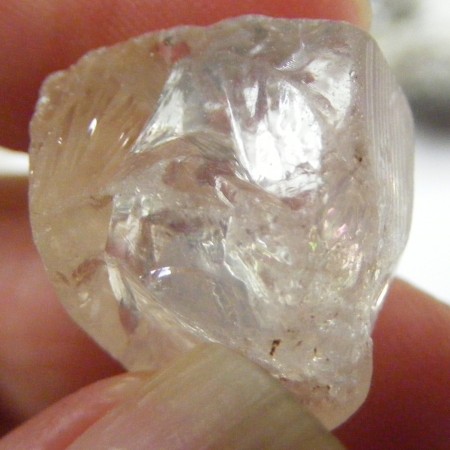