You can tell you’ve had a good night when your face hurts from smiling for so long!! The show was fantastic – everybody had a great time. 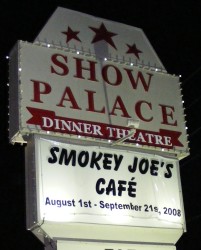 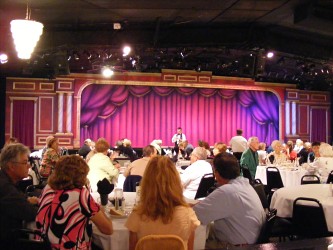 The show features songs written by Leiber & Stoller, two guys who wrote a lot of stuff in the 50s. I knew some of them, like Young Blood and Charlie Brown, and also heard a few that I liked very much, such as Some Cats Know and Spanish Harlem. They were able to inject humor into some of the songs like Poison Ivy (all itchy and scratching) and Charlie Brown (he’s a clown!).

Here we are waiting for dinner to start (click for larger version). They have the tables go up to the buffet in shifts, so there’s not a line when you’re getting food. That was nice. The food was fine – standard buffet fare. And cheesecake for dessert! Mmmm one of my favorites. :) 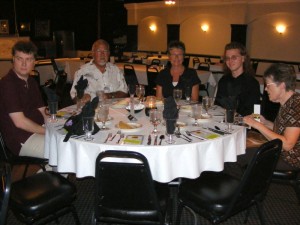 I would like to go see the holiday show there – it’s quite entertaining and a wonderful way to spend an evening with people I love.